The equivalent of the notch weir in a tube would be an orifice plate. This flow device is created by inserting an obstructing plate, usually with a round hole in the middle, into the pipe and measuring the pressure on each side of the orifice. This is again a very simple device that has been in use for measuring both gas flow and liquid flow for decades. 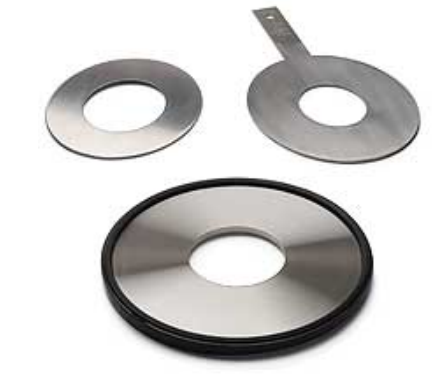 These plates are generally installed by trapping it between two pipe flanges. Pressure taps on each flange allow you to easily measure the pressure differential across the plate. This pressure differential, along with the dimensions of th are combined with certain fluid properties to determine the flow through the pipe.

The calculation for incompressible (liquid) flow is described by the incompressible Bernoulli equation, as long as the flow is sub-sonic ( < mach 0.3).

Given the following physical layout, you can modify this formula to take into account the dimensional information rather than the velocity. Also the equation above assumes perfectly laminar flow, which is generally not th in the real world. Flows in pipe will have a certainly amount of turbule which acts to convert kinetic flow energy into heat. This effect is taken into account by adding a new term to the equation called a discharge coefficient (Cd ). The resulting equation shows how th area and this new coefficient are applied to get a flow rate (Q). 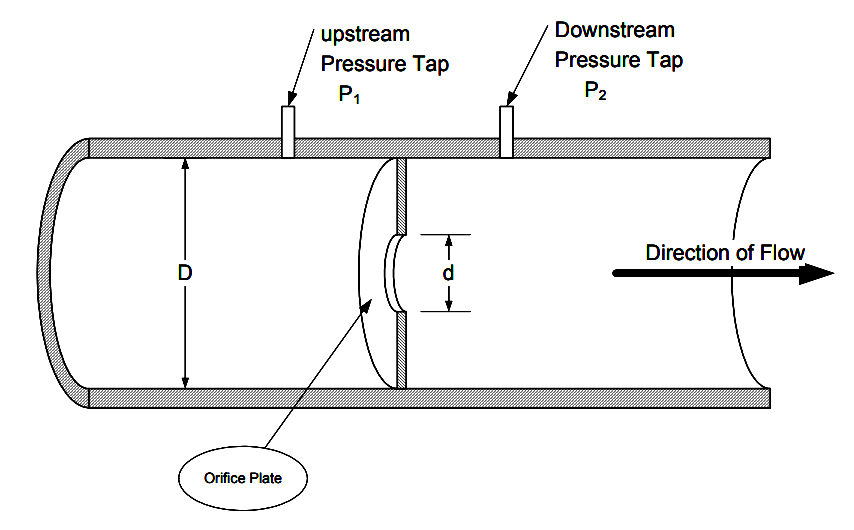 Since the actual flow profile at location 2 (downstream) is quite complex, making the effective value of A2 uncertain, a substitution is made and a new coefficient Cf is put in place of the area and Cd. The new equation looks like:

As you can see the formula has been simplified significantly, now only requiring the value of Cf, the area of the orifice (Ao), the density of the fluid and the differential pressure to obtain the volumetric flow rate. The only problem now is the value of Cf.

The flow coefficient is found experimentally and is tabulated in numerous reference books. This value ranges from 0.6 to 0.9 for most orifices, and the value depends on the orifice and pipe diameters as well as the Reynolds Number. 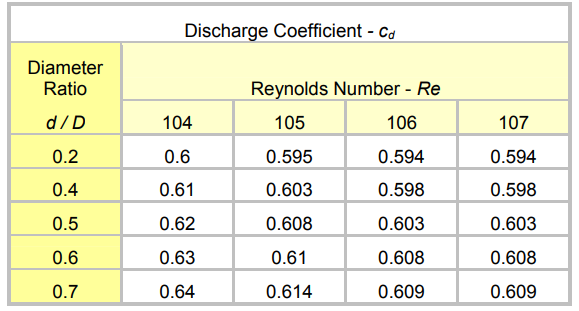 This takes care of the incompressible flow, but what about compressible flow, such as air. In this case the orifice flowmeter becomes much more difficult to calculate. The placement of the pressure taps even effect the calculations.

Without going into detail here are the equations for calculating the flow for a gas in pipes larger than 5CM in diameter. These are based on ISO 1991 and 1998. 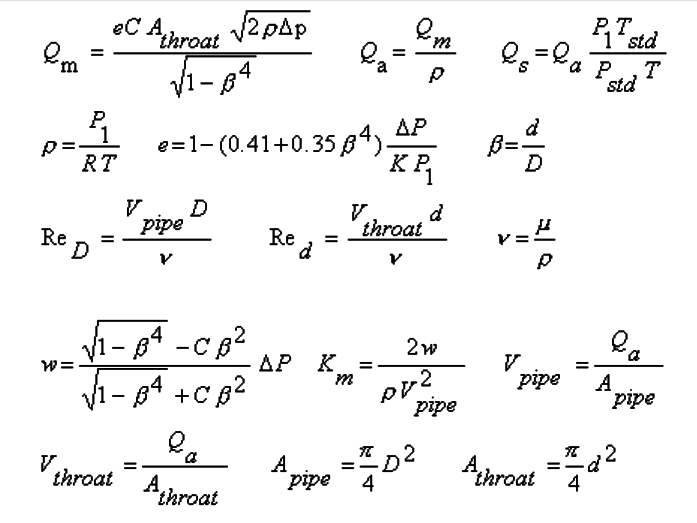 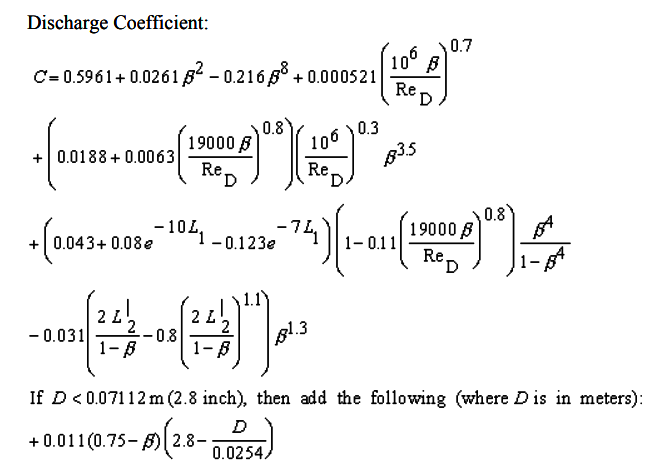 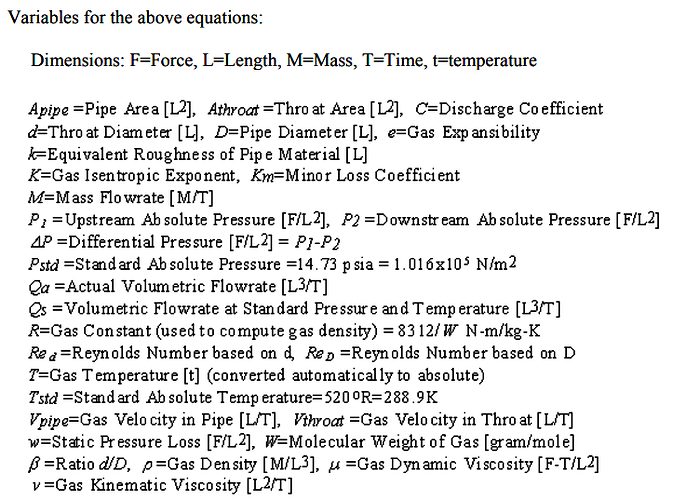 The primary disadvantage of the orifice type flow meter is that there is a significant pressure drop across the plate, which is not recoverable.

For this reason selection of this meter must only be used where you can afford the pressure drop without affecting the rest of the system operations. This is also the reason that the next flow meter type was developed.

An orifice plate is a device used for measuring the volumetric flow rate. It uses the same principle as a Venturi nozzle, namely Bernoulli’s principle, which states that there is a relationship between the pressure of the fluid and the velocity of the fluid. When the velocity increases, the pressure decreases, and vice versa.

An orifice plate is a thin plate with a hole in the middle. It is usually placed in a pipe in which fluid flows. When the fluid reaches the orifice plate, the fluid is forced to converge to go through the small hole; the point of maximum convergence actually occurs shortly downstream of the physical orifice, at the so-called vena contracta point (see below figure ). As it does so, the velocity and the pressure change. Beyond the vena contracta, the fluid expands and the velocity and pressure change once again. By measuring the difference in fluid pressure between the normal pipe section and at the vena contracta, the volumetric and mass flow rates can be obtained from Bernoulli’s equation. 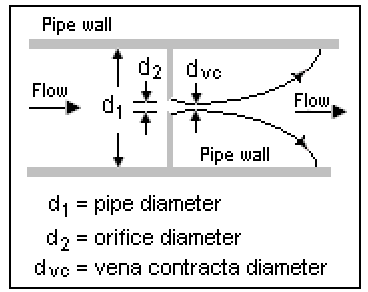 Orifice plates are most commonly used for continuous measurement of fluid flow in pipes. They are also used in some small river systems to measure flow rates at locations where the river passes through a culvert or drain. Only a small number of rivers are appropriate for the use of this technology since the plate must remain completely immersed; i.e., the approach pipe must be full, and the river must be substantially free of debris.

A restrictive flow orifice, a type of orifice plate, is a safety device to control maximum flow from a compressed gas cylinder. In the natural environment, large orifice plates are used to control onward flow in flood relief dams. In these structures, a low dam is placed across a river. In normal operation, the water flows through the orifice plate unimpeded as the orifice is substantially larger than the normal flow cross section.

However, during floods, the flow rate rises and floods out the orifice plate, which can only pass a flow determined by the physical dimensions of the orifice. Flow is then held back behind the low dam in a temporary reservoir, which is slowly discharged through the orifice when the flood subsides.