The optical disk of the absolute encoder is designed to produce a digital word that distinguishes N distinct positions of the shaft.

For example, if there are 8 tracks, the encoder is capable of producing 256 distinct positions or an angular resolution of 1.406 (360/256) degrees.

The linear patterns and associated timing diagrams are what the photodetectors sense as the code disk circular tracks rotate with the shaft. The output bit codes for both coding schemes are listed in Table 1. 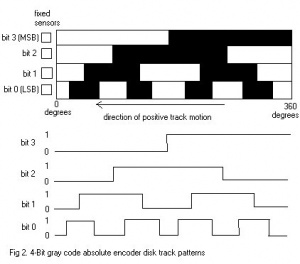 The gray code is designed so that only one track (one bit) will change state for each count transition, unlike the binary code where multiple tracks (bits) change at certain count transitions. This effect can be seen clearly in Table 1.

Since the gray code provides data with the least uncertainty but the natural binary code is the preferred choice for direct interface to computers and other digital devices, a circuit to convert from gray to binary code is desirable.

Figure 4 shows a simple circuit that utilizes exclusive OR gates (XOR) to perform this function.For a gray code to binary code conversion of any number of bits N, the most signficant bits (MSB) of the binary and gray code are always identical, and for each other bit, the binary bit is the exlcusive OR (XOR) combination of adjacent gray code bits.