The control configuration for a boiler installation depends on the size of the boiler, the requirements of the insurance company providing coverage for the facility, and the building codes of the locality in which the facility is located.

The overall boiler control system is typically integrated through a control panel known as the burner management system, which controls the boiler operation to maintain the system setpoint conditions and shuts down the boiler if an equipment damaging and life threatening condition is sensed.

For most packaged boiler installations, the basic boiler control is a single -element, proportional control device. In the case of a steam boiler, the control device is a pressure sensing element that sends a signal to the burner management system to adjust the burner firing rate to maintain a set pressure in the steam distribution system.

In a hot water boiler, the control device is a temperature-sensing element. In large steam boiler installations, the control system may be a three-element, proportional-integral-derivative controller that not only responds to the system set pressure, but may also respond to the rate of change in parameters such as pressure, steam flow, or water level.

In multiple boiler installations, the burner management systems of each boiler may be controlled by a master plant controller (sometimes referred to as a lead-lag controller) to stage boiler operation to minimize on/off operation. They may also minimize frequent burner cycling, which can cause thermal stresses leading to tube and tube sheet leaks.

While a brief description of the common types of control components associated with packaged boilers follows, the best guide to facility boiler operation and boiler controls is the manufacturer’s operating and maintenance instructions provided with the boilers. 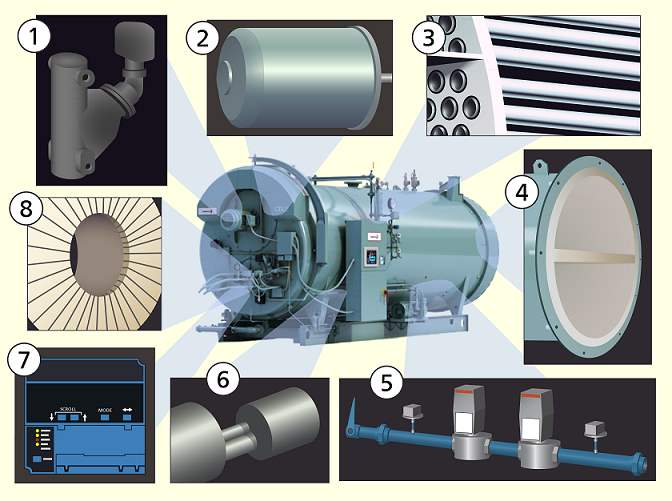 The following control devices are common to all boilers:

The following control devices are used with steam systems:

The following control devices are used with hot water systems:

The following control devices are used with ‘’‘gas-fired boilers’’’:

The following control devices are used with oil-fired (or dual fuel) boilers:

Boilers with dual-fuel burner systems require a selector switch to tell the control system which set of fuel controls to operate.

@mehta2155 thanks for the detailed explanation of the Boiler, I was looking for the diagrammatic view

Shop for the Yokogawa YS1700 Programmable Controller and other Controllers, Process Controllers at Celectric. Nationwide Free Delivery and Technical Support