Difference between PLC and PAC

PLCs (programmable logic controllers) have been around for more than 40 years, recent advances have greatly increased their capabilities, blurring the line between a PLC and PAC (programmable automation controller). What differences remain between these two categories? Is there a performance gap between PLCs and PACs that users should keep in mind when choosing the best solution for a particular application?

PLCs were created in the late 1960s to replace relay-based systems. Conceptually they were similar and used ladder logic that mimicked the appearance of wiring diagrams engineers used to represent physical relays and timers, and the connections among them. Early PLCs required dedicated proprietary terminals for programming, had very limited memory, and lacked remote I/O.

By the 1980s, PC-based software was introduced for programming PLCs, which had become faster and had added more features as years passed. Since then, many new technologies have been applied to PLCs, greatly expanding their capabilities on an almost continuous basis.

PACs are relatively new to the automation market, using the term coined by the market research firm ARC in 2001. Since then, there has been no specific agreement as to what differentiates a PAC from a PLC. Some users feel the term PAC is simply marketing jargon to describe highly advanced PLCs, while others believe there is a definite distinction between a PLC and a PAC. In any case, defining exactly what constitutes a PAC isn’t as important as having users understand the types of applications for which each is best suited.

Defining the needs of users

Generally, PACs and PLCs serve the same purpose. Both are primarily used to perform: automation, process control, data acquisition functions such as digital and analogue control, serial string handling, PID, motion control, and machine vision. Most suppliers carry a wide range of PLCs and PACs, which can make it difficult to choose the right product for a particular application.

PLCs are often programmed in ladder logic, a graphical programming language resembling the rails and rungs of ladders that is designed to emulate old electrical relay wiring diagrams .Typically they have been best suited for machine control, both simple and high speed. Common characteristics of these PLCs are simple program execution scans, limited memory, and a focus on discrete I/O with on/off control.

On the other hand, PAC control programs are usually developed with more generic software tools that permit the designed program to be shared across several different machines, processors, HMI terminals or other components in the control system architecture.It is geared more toward complex automation system architectures composed of a number of PC-based software applications, including HMI (human machine interface) functions, asset management, historian, advanced process control (APC), and others. A PAC is also generally a better fit for applications with extensive process control requirements, as PACs are better able to handle analog I/O and related control functions. A PAC tends to provide greater flexibility in programming, larger memory capacity, better interoperability, and more features and functions in general.

Unlike PLCs, which constantly scan all the I/O inputs in the control system at very high rates of speed, PACs utilize a single tag name database and a logical address system to identify and map I/O points as needed.

As a result of having an architecture based on ladder logic and a focus on discrete on-off control, expanding a PLC beyond its original capabilities—such as adding extensive analog control capabilities—has often proved difficult. In older or lower-end PLCs, separate hardware cards usually had to be added and programmed to accomplish functions outside the PLC’s core focus. These functions included, but weren’t limited to, networking multiple components, extensive process control, and sophisticated data manipulation. 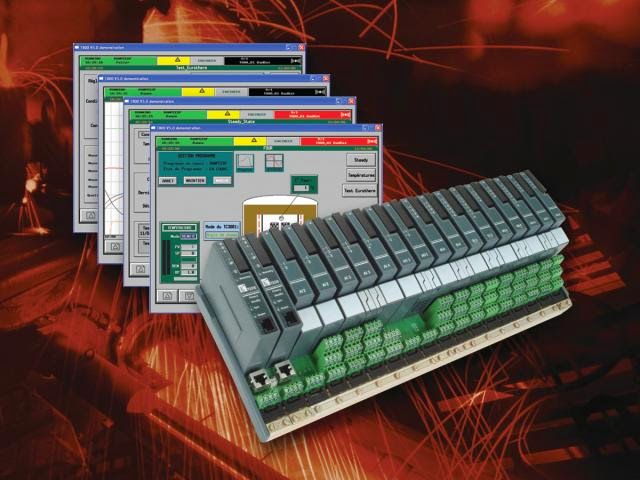 To answer the demand for more PLC functionality, manufacturers have added features and capabilities. For example, older PLCs could only accommodate a relatively small number of PID loops, typically about 16, while new PLCs can handle thousands of such loops. Newer PLCs often feature multiple communication ports, and greatly increased memory as compared to older models (see Figure 1).

On the other hand, PACs provide a more open architecture and modular design to facilitate communication and interoperability with other devices, networks, and enterprise systems. They can be easily used for communicating, monitoring, and control across various networks and devices because they employ standard protocols and network technologies such as Ethernet, OPC, and SQL.

PACs also offer a single platform that operates in multiple domains such as motion, discrete, and process control. Moreover, the modular design of a PAC simplifies system expansion and makes adding and removing sensors and other devices easy, often eliminating the need to disconnect wiring. Their modular design makes it easy to add and effectively monitor and control thousands of I/O points, a task beyond the reach of most PLCs.

Another key differentiator between a PLC and a PAC is the tag-based programming offered by a PAC. With a PAC, a single tag-name database can be used for development, with one software package capable of programming multiple models. Tags, or descriptive names, can be assigned to functions before tying to specific I/O or memory addresses. This makes PAC programming highly flexible, with easy scalability to larger systems.

For simple applications, such as controlling a basic machine, a PLC is a better choice than a PAC. Likewise, for most applications that consist primarily of discrete I/O, a PLC is the best choice—unless there are other extraordinary requirements such as extensive data handling and manipulation. 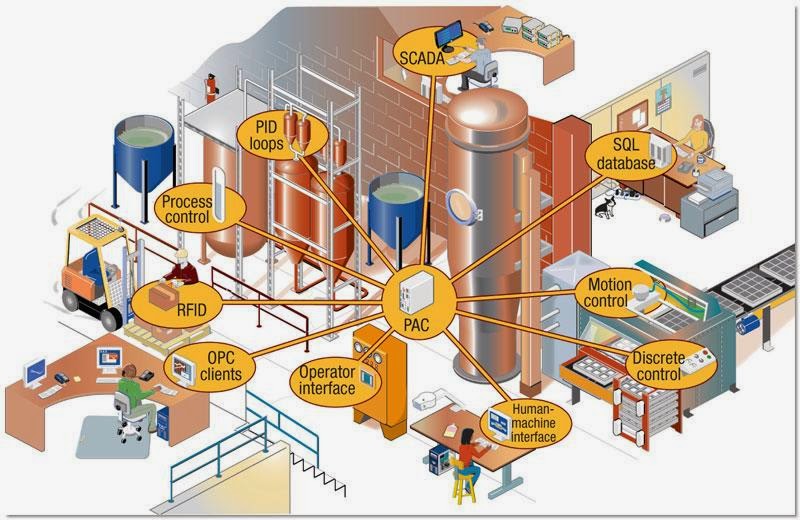 If the application includes monitoring and control of a large number of analog I/O points, then a PAC is generally the better solution. This is also the case when the application encompasses an entire plant or factory floor, a situation that typically calls for distributed I/O in large numbers, along with extensive loop control—functions better suited to a PAC than to a PLC.

The confusion arises when an application lies somewhere between simple and complex, and in these circumstances a high-end PLC or a low-end PAC platform will work. Ultimately, a choice between the two will be defined strictly by other factors outside of specific application requirements. These factors include, but aren’t limited to, past experience with each platform, price, the level of local support, and anticipated future growth and changes.

Once a decision is made between a PLC or a PAC, users typically have a wide range of products from which to choose, even if only a single vendor is being considered. That’s because PLCs and PACs are typically designed in systems of scale, meaning there is a family of controllers to choose from that range from lower I/O count to larger system capacity, with correspondingly more features and functions as I/O counts and prices increase.