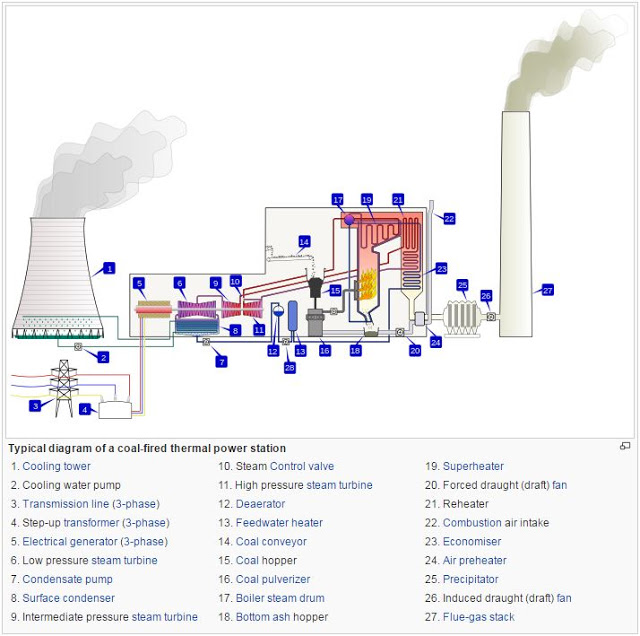 A thermal power station is a power plant in which heat energy is converted to electric power. In most of the world the turbine is steam-driven. Water is heated, turns into steam and spins a steam turbine which drives an electrical generator. After it passes through the turbine, the steam is condensed in a condenser and recycled to where it was heated; this is known as a Rankine cycle. The greatest variation in the design of thermal power stations is due to the different heat sources, fossil fuel dominates here, although nuclear heat energy and solar heat energy are also used. Some prefer to use the term energy center because such facilities convert forms of heat energy into electrical energy

 Power transmission network: To transfer the generated electricity to the consumers, the plant should be connected to electrical transmission system. Therefore the nearness to the electric network can play a roll.

 Geology and soil type: The power plant should be built in an area with soil and rock layers that could stand the weight and vibrations of the power plant.

 Earthquake and geological faults: Even weak and small earthquakes can damage many parts of a power plant intensively. Therefore the site should be away enough from the faults and previous earthquake areas.

 Topography: It is proved that high elevation has a negative effect on production efficiency of gas turbines. In addition, changing of a sloping area into a flat site for the construction of the power plant needs extra budget. Therefore, the parameters of elevation and slope should be considered.

 Water resources: For the construction and operating of power plant different volumes of water are required. This could be supplied from either rivers or underground water resources. Therefore having enough water supplies in defined vicinity can be a factor in the selection of the site.

 Environmental resources: Operation of a power plant has important impacts on environment. Therefore, priority will be given to the locations that are far enough from national parks, wildlife, protected areas, etc.

 Need for power: In general, the site should be near the areas that there is more need for generation capacity, to decrease the amount of power loss and transmission expenses.

 Climate: Parameters such as temperature, humidity, wind direction and speed affect the productivity of a power plant and always should be taken into account.

 Area size: Before any other consideration, the minimum area size required for the construction of power plant should be defined.

 Distance from airports : Usually, a power plant has high towers and chimneys and large volumes of gas. Consequently for security reasons, they should be away from airports.

 Archeological and historical sites: Usually historical building …are fragile and at same time very valuable. Therefore the vibration caused by power plant can damage them, and a defined distance should be considered.

Schematic of a Thermal Power Plant 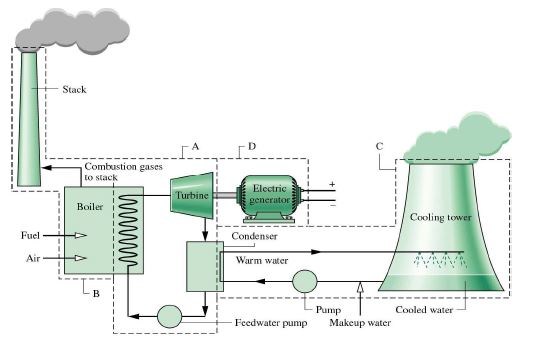 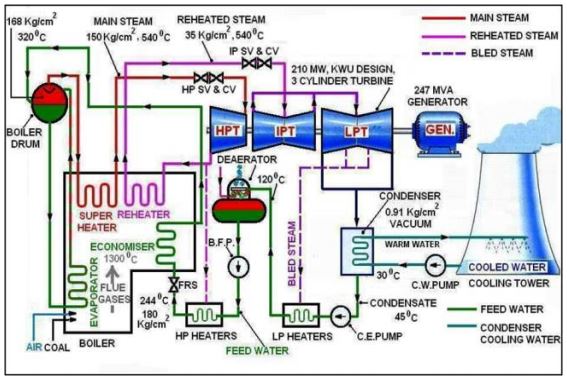 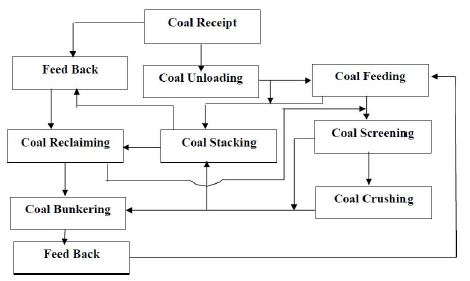 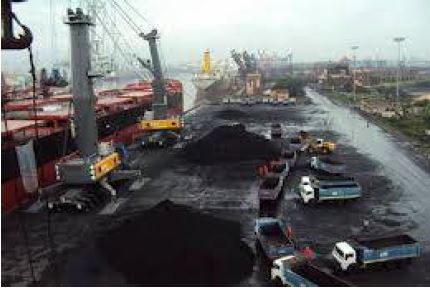 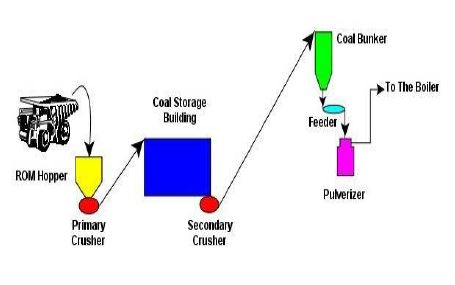 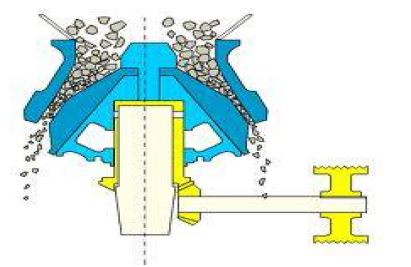  This process involves in dead storage in the form of piles laid directly in the ground. In case of road transport and aerial transport coal are unloaded in stack yard and the coal is stacked properly using dozers.

 When coal supply by railway is excess it would be stacked through a separate conveyor. For these purpose stacker or telescopic chutes are used.

 The stored coal is required to bunkered in case of emergency or improper coal supply. The reclaiming process involves the lifting of coal from stack yard by means of dozer or reclaimer like bucket wheel.

 This process involves feeding of bins and maintaining the level of these bins. From the

conveyor belt the coal is discharged into bunker or bins with the help of trippers.

 The Circulation of air is caused by difference of pressure is known as draught. Thus draught

is the differential in pressure between the two points.

 A draught tube may be

 A natural Draught is provided by the chimney or stack.

 Natural draught has its limitation . Modern plants has high rate of heat transfer and Draught losses are very high. in view of this Natural draught is used only for small boilers.

 Modern large size plants use very large size of boilers of capacity above 1000,000 kg per hour. Such boiler needs tremendous volume of air (around 200000 m3) Per minute. A chimney provide this. Therefore mechanical draught is used.

 In a mechanical draught the system the movement air is due to the action of fan. A mechanical Draught consist of forced Draught or induced draught or both.

 In forced draught system the fan is installed near the boiler .the fan force the air through the furnace, economizer, air preheater and chimney. The pressure of air, throughout the system, is above atmospheric and air is forced to flow through the system

 In an induced draught system the, the fan is installed near the base of the chimney .The burnt gases are sucked out from the boiler, thus reducing the pressure inside the boiler to less than atmosphere, this induces fresh air to enter the furnace. 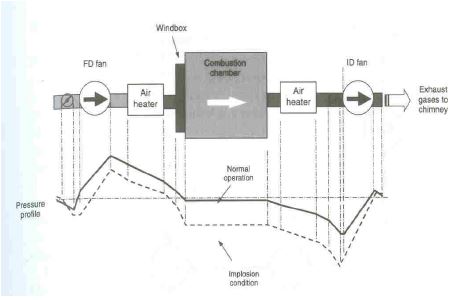  A boiler (or steam generator) is a closed vessel in which water, under pressure, is converted into steam. The heat is transferred to the boiler by all three modes of heat transfer i.e. conduction convection and radiation.

 The boiler is named so because the production of combustion pass through the tubes which are surrounded by water.

 A fire tube boiler is simple, compact and rugged in construction. Its initial cost is low. 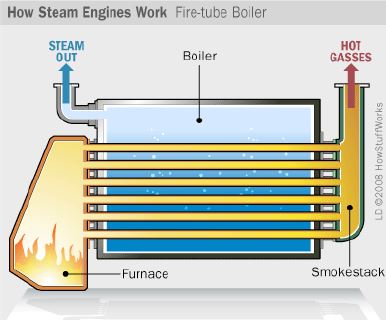  The circulation of water in the boiler is may be natural or forced. 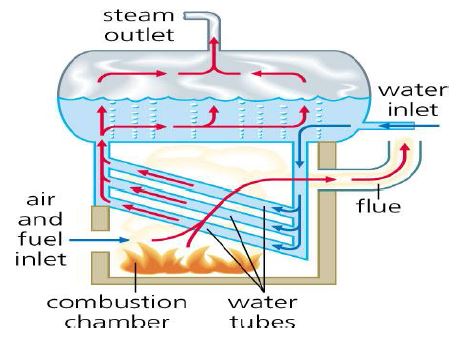  Superheated steam is that steam which contains more heat than the saturated steam at the same pressure. The additional heat provide more energy to the turbine hence power output is more.

 The function of the super heater is to remove the last trash of moisture from the saturated steam.

 A superheater may be convention type, radiant type or combination 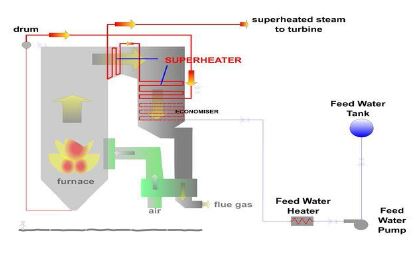 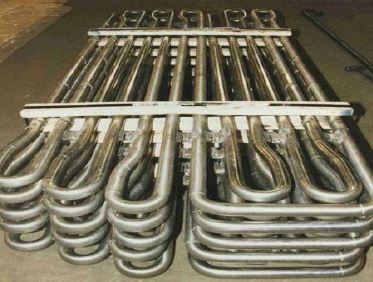  In addition to super heater modern boiler has reheater also. The function of the reaheater is to superheat the partly expanded steam from the turbine, this ensure that The steam remain dry through the last stage of the turbine.

 A reheater may be convention type, radiant type or combination

 The dissolved oxygen which would otherwise cause boiler corrosion are removed in the feed water heater.

 Thermal stresses due to cold water entering the boiler drum are avoided.

 Quantity of steam produced by the boiler is increased.

 Some other impurities carried by steam and condensate, due to corrosion in boiler and condenser, are precipitated outside the boiler. 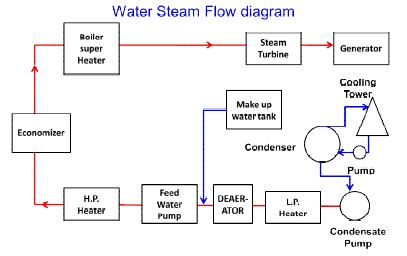  Economizer alone gives only 8% efficiency increase. The feed water from the high pressure heaters enters the economizer and picks up heat from the flue gases after the low temperature superheater.

 Economizer can be classified as an inline or staggered arrangement based on the type of tube arrangement. 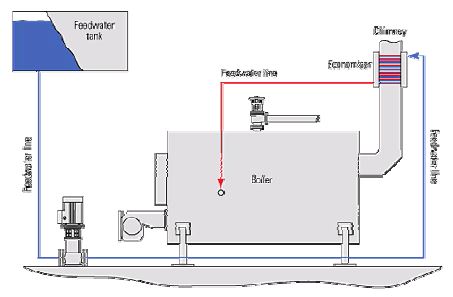  After the flue gases leave economizer, some further heat can be extracted from them and is used to heat the incoming air for combustion.

 Air preheaters may be of following types:

 Cooling of flue gases by 20 deg increase the efficiency of the plant by 1%. 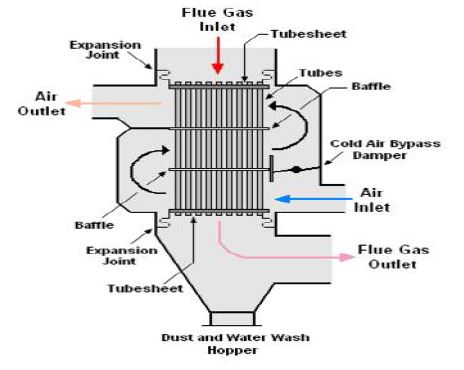 during expansion depends on the initial and final content of the steam.

 There are two types of steam turbines:

 In compounding, a number of rotors are connected or keyed to the same shaft

Governing signifies the process of controlling the volume of steam to meet the load fluctuation. 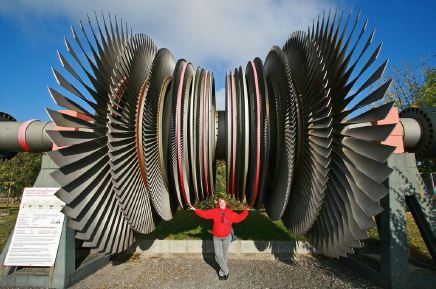 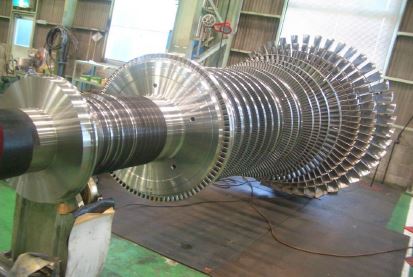 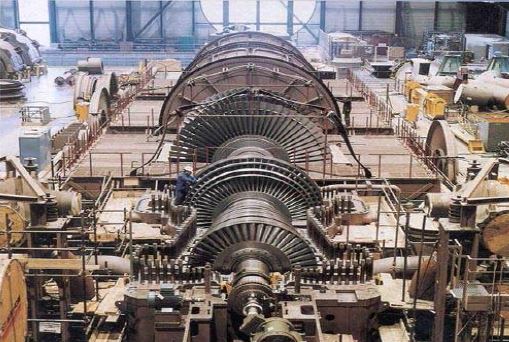  The function of the condenser is to condense the steam exiting the turbine.

 The condenser helps maintain low pressure at the exhaust. 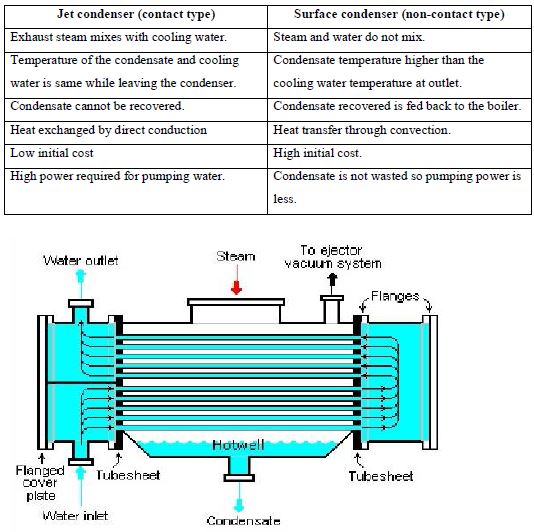  A deaerator is a device that is widely used for the removal of oxygen and other dissolvedgases from the feedwater to steam-generating boilers.

 In particular, dissolved oxygen in boiler feedwaters will cause serious corrosion damage in steam systems by attaching to the walls of metal piping and other metallic equipment and forming oxides (rust).

 There are two basic types of deaerators,

 The tray-type (also called the cascade-type) includes a vertical domed deaeration section mounted on top of a horizontal cylindrical vessel which serves as the deaerated boiler feedwater storage tank.

 The spray-type consists only of a horizontal (or vertical) cylindrical vessel which serves as both the deaeration section and the boiler feedwater storage tank. 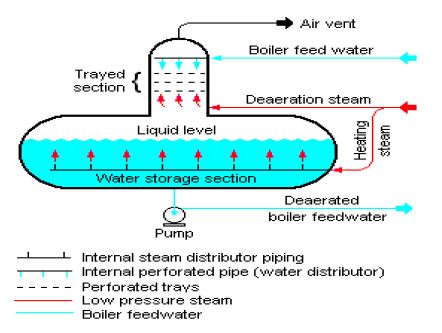 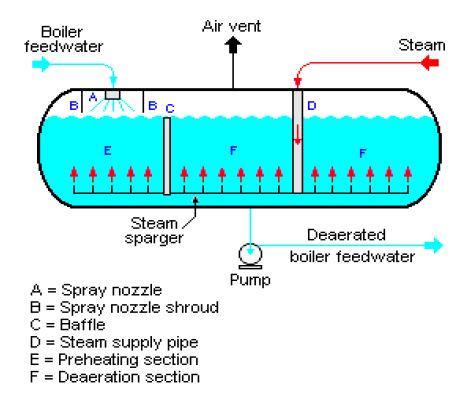  Water is led into the plants by means of circulating water pumps and after passing through the condenser is discharged back into the river.

 If such a source is not available closed cooling water circuit is used where the warm water coming out of the condenser is cooled and reused.

 In such cases ponds and cooling towers are used where the water loses heat to the atmosphere. 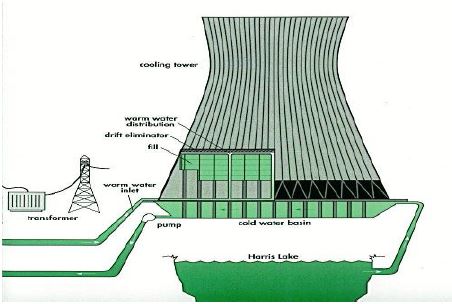 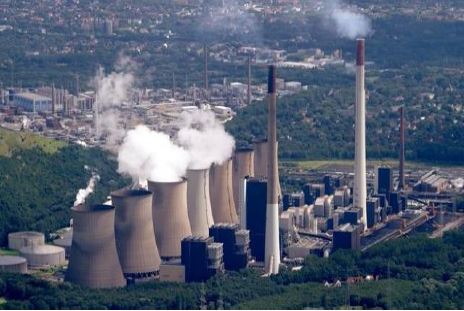