A feedback control loop is reactive in nature and represents a response to the effect of a load change or upset. A feedforward control loop, on the other hand, responds directly to load changes and thus provides improved control.

In feedforward control, a sensor is used to detect process load changes or disturbances as they enter the system. A block diagram of a typical feed- forward control loop is shown in the following Figure. Sensors measure the values of the load variables, and a computer calculates the correct control signal for the existing load conditions and process set point…

Feedforward control poses some significant problems. Its configuration assumes that the disturbances are known in advance, that they will have sensors associated with them, and that no important undetected disturbances will occur…

Therefore, feedforward control system is more complicated and more expensive, and it requires operator to have a better understanding of the process than does a standard feedback control loop. .

So, feedforward control is generally reserved for well-understood and critical applications.

feedforward is an closed loop, as it have an input and an output, so loop closing.

consider feedforward example for a simple heatexchanger or any similar process where we installed temperature sensor for measuring the heat loss and the same was compensated using feedforward. so its a closed loop even with sensing using primary variable or a distrubance variable.

Yes, FeedForward is open loop only. Thanks for clarification 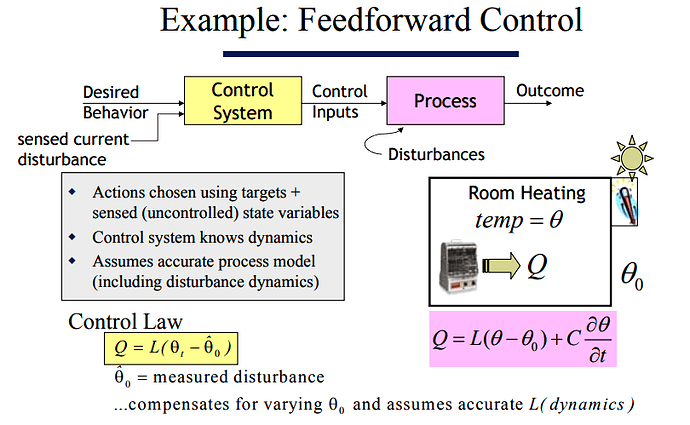