The visual means of level measurement previously discussed are rivaled in simplicity and dependability by float type measurement devices. Many forms of float type instruments are available, but each uses the principle of a buoyant element that floats on the surface of the liquid and changes position as the liquid level varies.

Many methods have been used to give an indication of level from a float position with the most common being a float and cable arrangement. The operational concept of a float and cable is shown in the following diagram.

The float is connected to a pulley by a chain or a flexible cable and the rotating member of the pulley is in turn connected to an indicating devices with measurement graduation. As can be seen, as the float moves upward, the counterweight keeps the cable tight and the indicator moves along the circular scale. 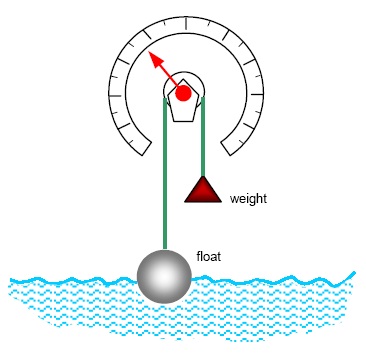 As in the figure A, as the float moves, the weight also moves by means of a pulley arrangement as in the diagram above. The weight which moves along a board with calibrated graduations, will be at the extreme bottom position when the tank is full and at the top when the tank is empty. This type is more commonly used for closed tanks at atmospheric pressure.

When it is desired to add a bit of sophistication to the measured systems for ease of reading the level at one location near the bottom of the tank and to gain a bit more accuracy, the system in the Figure B can be used. In the system shown in Figure B, a perforated stainless steel tape connects the float to a spring or weight loaded drum that rotates as floats moves up or down. The position of the tape on the drum can be read through a window. This type of level float can also be adapted to remote reading capabilities by installing a transmitter assembly.

Cost-
The cost of float level gauge is minimum as compare to other type of gauges.

Design-
The construction of gauge is simple and has reliable design

Material-
It is made from corrosion resistance material.

Yes, You can use float level measurement on any application as it is safe, reliable, less cost.