Each valve has a flow characteristic, which describes the relationship between the flow rate and valve travel.

As a valve opens, the flow characteristic, which is inherent to the design of the selected valve, allows a certain amount of flow through the valve at a particular percentage of the stroke. This enables flow regulation through the valve in a predictable manner.

The three most common types of flow characteristics are: 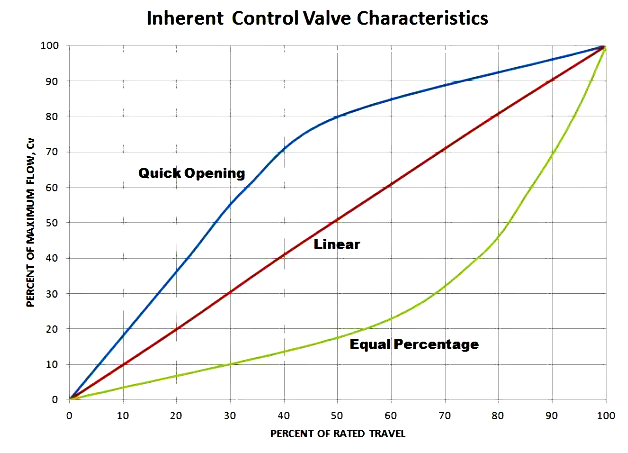 This characteristic provides a linear relationship between the valve position and the flow rate.
The flow through a linear valve varies directly with the position of the valve stem.

The equal percentage valve plug produces the same percentage change in flow per fixed increment of valve stroke at any location on its characteristic curve.

These types of valves are commonly used for pressure control applications and are most suitable for applications where a high variation in pressure drop is expected.

A quick opening valve plug produces a large increase in flow for a small initial change in stem travel. Near maximum flow is reached at a relatively low percentage of maximum stem lift.

Quick opening plugs are normally utilized in two position - applications but may be used in some linear valve applications. This is possible because of its initial linear characteristic at a low percentage of stem travel.

The slope of this linear region is very steep which produces a higher initial gain than the linear plug but also increases the potential instability of the control valve.

An inherent flow characteristic is the relation between valve opening and flow under constant pressure conditions.

The inherent characteristic of a valve is obtained when there is a constant pressure drop across the valve for all valve positions; the process fluid is not flashing, cavitating or approaching sonic velocity (choked flow); and the actuator is linear (valve stem travel is proportional to the controller output).

Difference between installed and inherent characteristics

The variations in pressure drop across the valve can be attributed to two basic causes: