On Off Valves Characteristics

Are On-Off valves having a flow characteristics like what control valves are having?

No, it entirely depends on which type of valve used & valve plug attached with it. If you want to know the difference you must specify what you mean by " what control valves are having" because different valve have different flow characteristics.

Moreover On/off valve & digital control valves are different, you can refer the link below:

Thank you for your answer @mehta2155 but I think you didn’t get my point. Let me elaborate my question.

Is it correct if I say that the On Off valves are having a flow characteristics like Linear, Equal percentage, Quick opening, Open/ Close, etc.?

In a equal percentage Control Valve if the input (DCS command) is 25% the output will not be linear to it. But if the DCS commanded the Control Valve to move from 0% to 100% the output will be linear, same thing with the On/ Off valve. If the DCS commanded the On/ Off valve to move, it will move from 0% to 100%. So if you will ask me what is the flow characteristic of On/ Off valve, I would answer No or if you really want me to give my answer instead of No I will say Linear. Since the flow rate and valve travel is Linear.

They have intermediate flow characteristics, the curve lies between linear & quick opening curves.

On/off valves shuts off the flow and remains tight in the flow direction. They offer great tightness when closed and a low flow resistance in the open position.
They doesn’t fully open or fully close. The data sheet might have shown a particular region of operation over the curve where valve is operating.

What your co-worker meant to say by the open/ close valve is that it operates only at two discrete stages 0% or 100%, basically all the valves are analogus you can’t compare to it’s digital operation.
It will be more clear if you specify which valve you are using.

please share the On/Off valve Datasheet, so we will have clear picture. 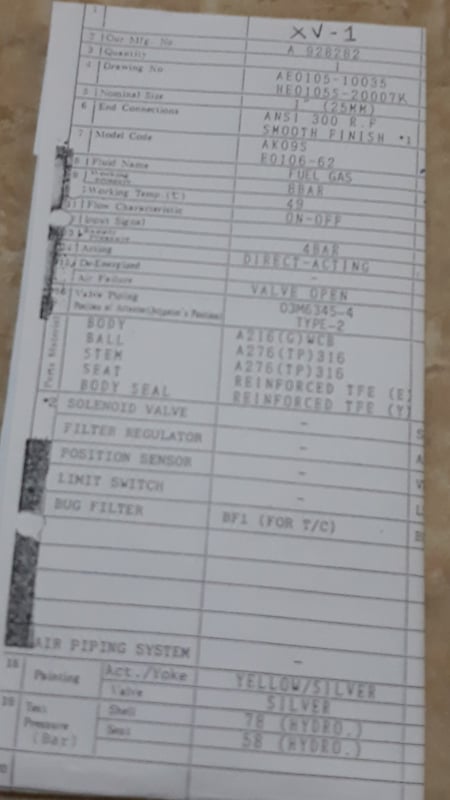 I think the vendor mentioned nature of valve application .i.e. on - off service.

They are not referring valve characteristics here.

Yes Mike that is what I am thinking too, Let’s wait for @mehta2155 and @vignesh

I would like to repeat again that on/off doesn’t mean they will have digital flow characteristics (0% & 100%), they are operated in open & close positions as described below. On/off means to say that they are able to provide tight shutoff despite of flow direction. The flow characteristics of your CV will lie between linear & quick opening.

In your data sheet there is no any kind of relevant data available like what is flow characteristic or how valve is operating it entirely depends on your application how you operate.

Thank you very much @mehta2155 your explanation indeed a great help.

Control Valve Flow Characteristics is the relationship between the percentage of valve opening on the flow rate.

So Basically, Every valve type has flow characteristics either it is control valve or on-off valve.

In your datasheet, the OEM mentioned the type of application only. It is good if they used the description like " Application / Service " instead of flow characteristics.

Also i suggest to check any latest valve datasheet for reference.

Thank you @vignesh for your input and suggestion,very much appreciated

Valve characteristics for Control valves is important since they control the loop based on inputs received. Speed of opening/closing of On off valves can be controlled. For On Off valves with Pneumatic actuator we can use flow regulators to control Opening/Closing time.