The relief valve, as shown in figure, is a type of valve used to control or limit the pressure in a system or vessel, which can build up by a process upset, instrument or equipment failure, or fire. 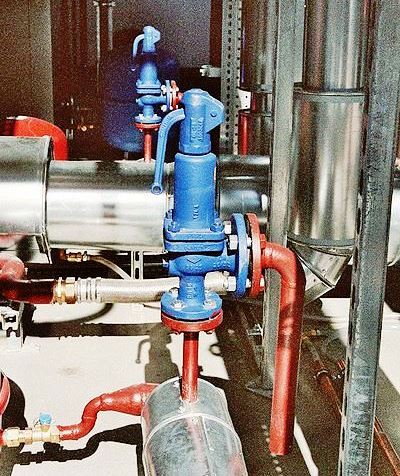 The pressure is relieved by allowing the pressurized fluid to flow from an auxiliary passage out of the system. The relief valve is designed or set to open at a predetermined set pressure to protect pressure vessels and other equipment from being subjected to pressures that exceed their design limits. When the set pressure is exceeded, the relief valve becomes the “path of least resistance” as the valve is forced open and a portion of the fluid is diverted through the auxiliary route.

The diverted fluid is usually routed through a piping system known as a flare header or relief header to a central, elevated gas flare where it is usually burned and the resulting combustion gases are released to the atmosphere. As the fluid is diverted, the pressure inside the vessel will drop. Once it reaches the valve’s reseating pressure, the valve will close. The blow down is usually stated as a percentage of set pressure and refers to how much the pressure needs to drop before the valve reseats.

If the valve is opened, the pressure has to decrease enormously before the valve closes, and the outlet pressure of the valve can easily keep the valve open. Another consideration is that if other relief valves are connected to the outlet pipe system, they may open as the pressure in exhaust pipe system increases. This may cause undesired operation. In some cases, a bypass valve acts as a relief valve to return all or part of the fluid discharged by a pump or gas compressor back to either a storage reservoir or the inlet of the pump or gas compressor.

This is done to protect the pump or gas compressor and any associated equipment from excessive pressure. The bypass valve and bypass path can be internal or external. Many fire engines have such relief valves to prevent the over-pressurization of fire hoses.

In other cases, equipment must be protected against being subjected to an internal vacuum that is lower than the equipment can withstand. In such cases, vacuum relief valves are used to open at a predetermined low pressure limit and to admit air or an inert gas into the equipment control the amount of vacuum. Pressure Relief Valves and Pressure Safety Valves designed to open up in order to relieve excess pressure from inside a process vessel or piping system.