Safety and relief valves are normally tested after major repairs or overhaul. There are normally four items that can be tested on a safety valve or a relief valve: Valve set-point, blow-down, accumulation, and seat leakage.

A brief discussion of the various testing methods follows, in addition to a diagram of a safety valve test stand (’’‘Figure 1’’’). The type of method used depends upon the individual requirements and circumstances. 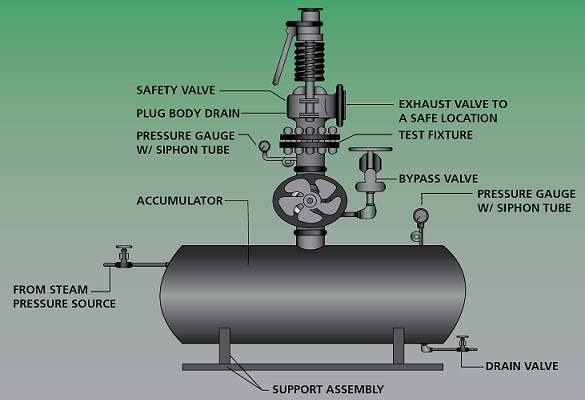 Safe operation of a boiler is dependent on a vital accessory, the safety valve. Failure to test the safety valve on a regular basis or to manually open it periodically can result in heavy accumulations of scale and deposits of sediment or sludge near the valve. These conditions can cause the safety valve spring to solidify or the disc to seal, ultimately rendering the safety valve inoperative. A constantly simmering safety valve is a danger sign and must not be neglected.

Your preventive maintenance program includes the documentation and inspection of the safety valve. A daily test must be performed when the boiler is in operation. Simply raise the hand-operating lever quickly to its limit and allow it to snap closed. Any tendency of a sticking, binding, or leaking of the safety valve must be corrected immediately.

If an external inspection of the valve reveals that a valve is leaking between the seat and the disc, it may be a result of foreign matter such as ash, dirt, or rust particles trapped between the seat and disc. It is also possible that the valve did not re-seat correctly after the last time it popped. In many cases, a mechanic can correct either of these two causes of leakage by manually lifting or hand lifting the valve.

Hand lifting clears foreign matter out of the valve and gives the disc a chance to reseat properly. However, any time a safety valve is lifted, there is a corresponding drop in system pressure.

Before the valve is hand lifted, the appropriate operating personnel should be notified so that they can compensate for the drop in system pressure and keep it from interfering with normal operations.

If operating personnel are not forewarned, when pressure drops as the valve is hand lifted, they might take emergency measures to raise pressure or shut down the system. Such actions could be costly and perhaps dangerous.

Anyone who hand lifts a valve must take appropriate personal safety precautions. These precautions include using the required personal protective equipment and connecting a hook and lanyard or similar device to the valve’s release lever.

Attaching a hook to the valve’s release lever enables the mechanic to position himself as far away from the valve as possible. This is important because when a valve is hand lifted, a great deal of hot, pressurized fluid could be released.

To lift the valve, the mechanic pulls the hook hard enough to open the valve all the way.

The valve is then held open for only two or three seconds. If the valve is held open any longer, the rush of steam could damage the disc.

After the valve closes, the external inspection is repeated to check for leaks and more heat than would normally be expected after hand lifting. If the valve seats properly after lifting, it should cool down immediately.

If the second inspection indicates that the problem was not solved by hand lifting the valve or if hand lifting was not a possible solution for the initial problem, follow plant procedures to have the valve examined and the problem corrected.

A relief valve or a safety valve can be removed from the system in which it is installed to permit inspection and repair, and to permit bench testing for the actual pressure at which the valve provides relief action.

Relief valves, safety valves, and pilot valves should be inspected according to a periodic schedule and repaired as necessary to ensure effective operation. Inspection schedules for individual valves vary, depending on the severity of the service in which the valves are employed. As rules of thumb:

Repairs performed on safety valves and safety relief valves by groups or individuals other than the manufacturer must be performed by an organization in possession of a current National Board VR Certificate of Authorization.