What is An Absorption Chiller?

What is An Absorption Chiller ?

An Absorption Chiller is a machine uses a heat source to generate chilled water rather than electrical source that is used in vapor compression cycle. 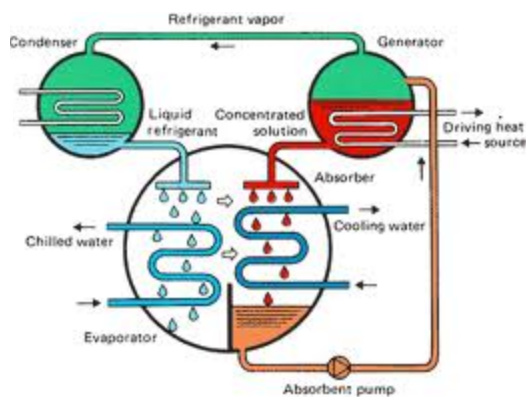 It’s an attractive idea to produce chilled water with heat.

The absorption chiller is very attractive because using energy in the form of heat, such as solar or waste heat, makes it using a little work input and saving in money. Also it can works with industrial waste heat streams.

Why Do We Use Absorption Chiller ?

Vapor compression systems use a high grade of energy input to drive a compressor, so it consumes a lot of electricity. This also leads to more releasing of CO2 emissions. While the absorption chillers use a low grade of energy to generate a cooling effect. So we don’t have to use electricity but we can use any other heat source.

Absorption chiller also have other advantages like silent operation which is not compared with other systems.

The vapor compression cycle basically consists of an evaporator, condenser, throttling valve, and a compressor. Figure below illustrates the components and flow arrangement for it. In the shown cycle, refrigerant in the form of a cool mixture of liquid and vapor centers the evaporator at low pressure (4). Then using relatively warm air or water, the liquid refrigerant will boil. The resulted vapor (1) is pumped by the compressor, which raises refrigerant vapor pressure and temperature. As we said, a refrigerant enters the evaporator at low pressure in the form of a cool mixture of vapor and liquid (4). Then the liquid refrigerant boils due to heat transferred from a relatively warm water to it. The function of the absorber is similar the suction side of the compressor, which the vapor refrigerant enters it and mixes with the absorbent.